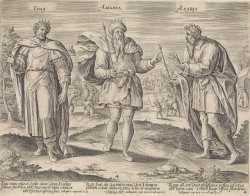 "Strengthened by Jehovah." The son and successor of Joash, and eighth king of the separate kingdom of Judah.1 He began his reign by punishing the murderers of his father.2 He was the first to employ a mercenary army of 100,000 Israelite soldiers, which he did in his attempt to bring the Edomites again under the yoke of Judah.3 He was commanded by a prophet of the Lord to send back the mercenaries, which he did,4 much to their annoyance. His obedience to this command was followed by a decisive victory over the Edomites.5 Amaziah began to worship some of the idols he took from the Edomites, and this was his ruin, for he was vanquished by Joash, king of Israel, whom he challenged to battle. The disaster he thus brought upon Judah by his infatuation in proclaiming war against Israel probably occasioned the conspiracy by which he lost his life.6 He was slain at Lachish, whither he had fled, and his body was brought upon horses to Jerusalem, where it was buried in the royal sepulcher.7

For other occurances of the name "Amaziah", click here.