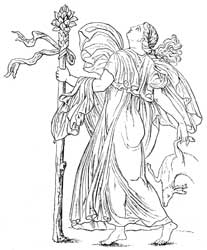 The Bacchantes were a group of women who followed Dionysus on his travels. They were clothed in animal skins and wandered in an ecstatic frenzy across fields and through woods and participated in orgiastic rites. See also Bacchae and maenads.

A male follower or priest was called a Bacchant.

The Bacchantes were portrayed on Greek vases and statues as women with loose hair, dancing in ecstasy, and holding the vine-covered thyrsus in their hands. Examples are the bowl by Hieron and Macron at Berlin and the Bacchante with thyrsus and panther on a bowl by Brygus (fifth century BCE) at Munich. Scopas created a statue of a Bacchante (fourth century BCE), and painters such as Rubens and Poussin used them as subjects.