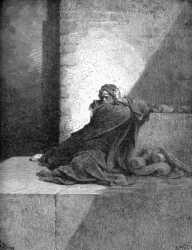 "Blessed." The secretary of the prophet Jeremiah.1 He was of the tribe of Judah.2 To him Jeremiah dictated his prophecies regarding the invasion of the Babylonians and the Captivity. These he read to the people from a window in the temple in the fourth year of the reign of Jehoiakim, king of Judah.3 He afterwards read them before the counsellors of the king at a private interview; and then to the king himself, who, after hearing a part of the roll, cut it with a penknife, and threw it into the fire of his winter parlour, where he was sitting.

During the siege of Jerusalem by Nebuchadnezzar, he was the keeper of the deed of purchase Jeremiah had made of the territory of Hanameel.4 Being accused by his enemies of favouring the Chaldeans, he was cast, with Jeremiah, into prison, where he remained till the capture of Jerusalem (586 BCE). He probably died in Babylon.