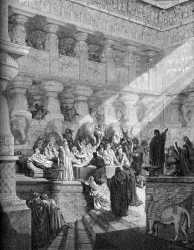 "Bel protect the king." In the Bible, the last of the kings of Babylon,1 the son of Nabonidus. When still young he made a great feast to a thousand of his lords, and when heated with wine sent for the sacred vessels his "father,"2 i.e. ancestor, Nebuchadnezzar had carried away from the temple in Jerusalem, and he and his princes drank out of them. In the midst of their revelry a hand was seen by the king tracing on the wall the words מנא מנא תקל ופרסין‬. Belshazzar had astrologers and soothsayers brought in but none could read what was written. At the instance of the queen, Daniel was brought in, and he interpreted it:

25 And this is the writing that was written, Mene, Mene, Tekel, Upharsin.
26 This is the interpretation of the thing: Mene; God hath numbered thy kingdom, and finished it.
27 Tekel; Thou art weighed in the balances, and art found wanting.
28 Peres; Thy kingdom is divided, and given to the Medes and Persians.

That night the kingdom of the Chaldeans came to an end, and the king was slain.3