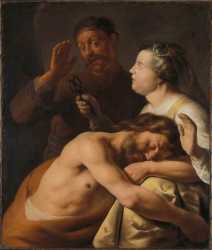 "Languishing." A Philistine woman who dwelt in the valley of Sorek.1 She was bribed by the "lords of the Philistines" to obtain from Samson the secret of his strength and the means of overcoming it, and was offered eleven hundred pieces of silver by each of them. She tried on three occasions to obtain from him this secret in vain. On the fourth occasion she wrung it from him. She made him sleep upon her knees, and then called the man who was waiting to help her; who "cut off the seven locks of his head," and so his "strength went from him."