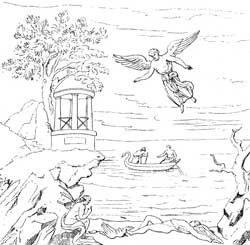 A son of Daedalus. On his flight from Crete, his father attached to his body wings made of wax, and advised him not to fly too high; but Icarus, forgetting the advice of his father, flew so high that the sun melted the wings, and Icarus fell down into the sea, which was called after him, the Icarian.1 His body, which was washed on shore, was said to have been buried by Heracles.2

The ancients explained the fable of the wings of Icarus, by understanding by it the invention of sails; and in fact some traditions stated that Daedalus and Icarus fled from Crete in a ship. Diodorus3 relates that Icarus, while ascending into the air in the island of Icaria, fell down through his carelessness, and was drowned.

Daedalus and Icarus are depicted on many Greek vases, gem stones, and Pompeian murals (such as at the Casa del Meandro). A Roman relief shows Daedalus fashioning the wings with which they escaped. Brueghel painted the fall of Icarus. Furthermore, the painting by Brill and the group of sculptures by Canova.