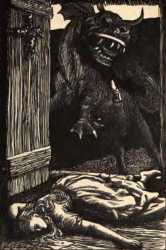 In Scottish folklore, a treacherous, malicious water spirit that lurks in streams and rivers. It usually assumes the form of a black horse and enticed people to mount him. He then rushed to his pool, and carried the unsuspecting victim to his death. The kelpie also causes swelling torrents, and may come night after night to a farm, and cause fear and much annoyance. It might be caught, and then made to do much heavy work. This required casting over the kelpie's head a bridle, on which had been made the sign of a cross. The spirit could also be killed

A curious account in which a shepherd's daughter is pursued by a kelpie rising from its lair as she passes by is found in George MacDonald's novel Ranald Bannerman's Boyhood (1871).

In The Statistical Account of Scotland, under Parish of St. Vigeans, co. Caithness, the following is written: A tradition had long prevailed here, that the water-kelpy (what Mr. Hume, in his tragedy of Douglas, calls the angry ſpirit of the water) carried the ſtones for building the church; that the foundation of it was ſupported upon large bars of iron; and that under the fabric there was a lake of great depth.

The water-horse is sometimes also called each sìth, "fairy horse" or "unearthly horse." See also each uisge, which differs from the kelpie in that it haunts lochs.