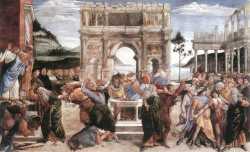 "Ice", "Hail." A Levite, the son of Izhar, the brother of Amram, the father of Moses and Aaron.1 The institution of the Aaronic priesthood and the Levitical service at Sinai was a great religious revolution. The old priesthood of the heads of families passed away. This gave rise to murmurings and discontent, while the Israelites were encamped at Kadesh for the first time, which came to a head in a rebellion against Moses and Aaron, headed by Korah, Dathan, and Abiram. Two hundred and fifty princes, "men of renown" i.e., well-known men from among the other tribes, joined this conspiracy. The whole company demanded of Moses and Aaron that the old state of things should be restored, alleging that they took too much upon them.2

On the morning after the outbreak, Korah and his associates presented themselves at the door of the tabernacle, and "every man took his censer and put fire in them and laid incense on them." But immediately "fire came out from the Lord and consumed the 250 men offering the incense."3 Dathan and Abiram "came out and stood at the door of their tents, together with their wives, their sons, and their little ones," and it came to pass that "the ground under them split apart." "And the earth opened its mouth and swallowed them up, with their households and all the people who belonged to Korah and all their goods." A plague thereafter began among the people who sympathized in the rebellion, and was only stayed by Aaron's appearing between the living and the dead, and making atonement for them.4

The descendants of the sons of Korah who did not participate in the rebellion afterwards rose to eminence in the Levitical service.