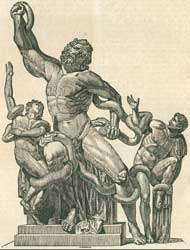 A Trojan hero, who plays a prominent part in the post-Homeric legends about Troy, especially in the Ἰλίον πέρσις (Ilion persis), the substance of which is preserved in Proclus' Chrestomathia. He was a son of Antenor1 or of Acoëtes,2 and a priest of the Thymbraean Apollo, or, according to others, of Poseidon.3

His story runs as follows: — As the Greeks were unable to take Troy by force, they pretended to sail home, leaving behind the wooden horse. While the Trojans were assembled around the horse, deliberating whether they should draw it into their city or destroy it, Laocoon hastened to them from the city, and loudly cautioned them against the danger which it might bring upon them. While saying this he thrust his lance into the side of the horse.4 The Trojans, however, resolved to draw it into the city, and rejoiced at the peace which they thought they had gained at length, with sacrifices and feasting.

In the meantime Sinon, who had been taken prisoner, was brought before the Trojans, and by his cunning treachery he contrived to remove every suspicion from himself and the wooden horse. When he had finished his speech, and Laocoon was preparing to sacrifice a bull to Poseidon, suddenly two fearful serpents were seen swimming towards the Trojan coast from Tenedos. They rushed towards Laocoon, who, while all the people took to flight, remained with his two sons standing by the altar of the god.5 The serpents first entwined the two boys, and then the father, who went to the assistance of his children, and all three were killed.6 The serpents then hastened to the acropolis of Troy, and disappeared behind the shield of Tritonis.

The reason why Laocoon suffered this fearful death is differently stated. According to Virgil, the Trojans thought that it was because he had run his lance into the side of the horse, but according to others because, contrary to the will of Apollo, he had married and begotten children,7 or because Poseidon, being hostile to the Trojans, wanted to show to the Trojans in the person of Laocoon what fate all of them deserved.

The sublime story of the death of Laocoon was a fine subject for epic and lyric as well as tragic poets, and was therefore frequently treated by ancient poets, such as Bacchylides, Sophocles, Euphorion, Lysimachus, the Pseudo-Peisander, Virgil, Petronius, Quintus Smyrnaeus, and others. But Laocoon is equally celebrated in the history of ancient art, as in that of ancient poetry; and a magnificent group, representing the father with his two sons entwined by the two serpents, is still extant.

The Laocoon group, dating back to the second half of the first century BCE, was discovered in 1506, in the time of pope Julius II, at Rome, in the Sette Sale, on the side of the Esquiline hill; and the pope, who knew how to appreciate its value, purchased it from the proprietor of the ground where it had been found, for an annual pension, which he granted to him and his family. This group excited the greatest admiration from the moment it was discovered, and may be seen at Rome in the Vatican. Good casts of it exist in all the museums of Europe.

Pliny,8 who calls it the masterwork of all art, says that it adorned the palace of the emperor Titus, and that it is the work of the Rhodian artists Agesander, Polydorus, and Athenodorus. He further states that the whole group consists of one block of marble, but a more accurate observation shows that it consists of five pieces. The group was badly damaged and during restoration the arms were incorrectly repaired. In September 1957 fragments of the Laocoon group were discovered in a cave near Sperlonga, which are believed to be the originals.

For other occurances of the name "Laocoon", click here.