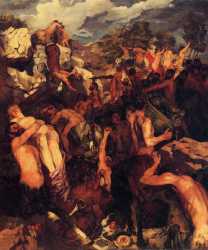 A legendary people of Thessaly, whose ancestor was Lapithes and from whom they derived their name. One well-known story relates how a king of the Lapiths, Pirithous, invited the neighbors centaurs to his wedding. The centaurs, unaccustomed to drinking wine, quickly became intoxicated and when one of them tried to ravish the bride, Hippodamia, the other centaurs followed his example. This led to the celebrated battle between the Lapiths and the centaurs. The hero Theseus came to the aid of the Lapiths, and Apollo sided with them as well, and thus they were victorious. The defeated centaurs were expelled from Thessaly.

During the Trojan war, the Lapiths joined the Greek fleet with forty manned ships, commanded by Polypoetes and Leonteus.