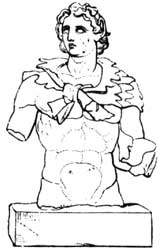 The infant son of Athamas and Ino who was transformed into the sea god Palaemon when Ino cast herself and her son into the sea in order to escape from her mad husband, who imagined her to be a lioness and her two sons to be lion's cubs. Ino was changed into a sea divinity, Leucothea.

In his honor every fifth year gymnastic contests were held, which were called Isthmian.

His face is shown on coins from Corinth.