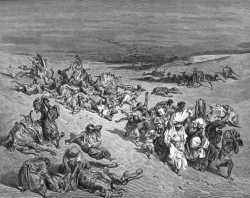 Hebrew deber, "destruction," a "great mortality", the fifth plague that fell upon the Egyptians. It was some distemper that resulted in the sudden and widespread death of the cattle. It was confined to the cattle of the Egyptians that were in the field.

1 Then the Lord said unto Moses, Go in unto Pharaoh, and tell him, Thus saith the Lord God of the Hebrews, Let my people go, that they may serve me.
2 For if thou refuse to let them go, and wilt hold them still,
3 Behold, the hand of the Lord is upon thy cattle which is in the field, upon the horses, upon the asses, upon the camels, upon the oxen, and upon the sheep: there shall be a very grievous murrain.
4 And the Lord shall sever between the cattle of Israel and the cattle of Egypt: and there shall nothing die of all that is the children's of Israel.
5 And the Lord appointed a set time, saying, To morrow the Lord shall do this thing in the land.
6 And the Lord did that thing on the morrow, and all the cattle of Egypt died: but of the cattle of the children of Israel died not one.
7 And Pharaoh sent, and, behold, there was not one of the cattle of the Israelites dead. And the heart of Pharaoh was hardened, and he did not let the people go.