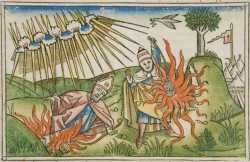 "Generous." The eldest son of Aaron and Elisheba.1 He, his father and brother, and seventy old men of Israel were led out from the midst of the assembled people,2 and were commanded to stay and worship God "afar off," below the lofty summit of Sinai, where Moses alone was to come near to the Lord. Subsequently,3 Nadab and his brother Abihu were struck dead before the sanctuary by fire from the Lord. Their offence was kindling the incense in their censers with "strange" fire, i.e., not taken from that which burned perpetually,4 on the altar.