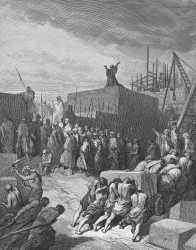 The Holy Temple in Jerusalem was one of the seven things God conceived before beginning the Creation of the world. Many miracles were associated with its building. It only rained at night throughout the building project; the shamir worm cut all the stones needed for the work; the stones moved of their own accord from the quarry;1 and all the workers were immediately transported to the Garden of Eden upon its completion.

The design of the Temple was that of a microcosm, a model of heaven and earth. The building itself was made up of the Sanctuary and the Holy of Holies.

The Temple is also understood to be a kind of macrocosm of the human soul, its three-chamber structure reflecting the three levels of the soul: Nefesh, Ruach, and Neshamah. The Ark of the Covenant emanated a supernal light that illuminated the interior of the Temple.2 The gold menorah at the doorway would glow when the time for Morning Prayer came.3

During the entire existence of the Temple, the rain and wind never put out a single sacrifice. The fire of the altar was unlike any other: it was clear, yet its flames were solid; it could consume both dry and wet wood, and the smoke it produced was never affected by the wind. Instead, the movement of the smoke was a kind of continuous omen, and the people could divine whether the future was positive or negative based on which way it flowed.4 God and/or other divine entities such as angels would appear in the Temple precincts. The presence of God could be experienced in auditory and/or visible manifestations.5

According to most of the prophets, God punished Israel for its many sins by decreeing the destruction of Solomon's Temple. God sent multiple omens to Nebuchadnezzar, the king of Babylon, directing him to conquer Judah.6 Angels even opened the city walls to the invaders.7

For the forty years preceding its destruction, signs of God's judgment were manifest throughout the building. Doors opened of their own accord, the Urim and Thummim did not give a positive answer, and the scarlet strap would not turn white.8

At the time of the first Temple's destruction, objects of power were hidden away, including the Ark of the Covenant, the anointing oil, a jar of manna, Aaron's staff, and the treasure of the Philistines.9

When the Romans destroyed Jerusalem and the Second Temple, the Sages divided on whether it too was a punishment sent from God, or happened for some other, more positive divine purpose. As the Romans looted the building, the High Priest fled to the rooftop. There he took the keys and cast them into heaven, where a supernal hand caught them and took them to be held until the coming of the Messiah. When Titus finally entered the sanctuary, he cut the curtain of the Holy of Holies, causing it to bleed. Those Temple vessels he could find he took as prizes to Rome.

According to the Haggadah, the appearance of a third Temple (either miraculously or by human effort) is one of the things that will occur in the messianic era, though there is controversy over whether the animal sacrifices will also be reinstated.