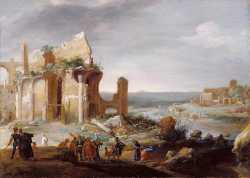 In the Bible, the first of the plagues visited upon Pharaoh and the Egyptians for his refusal to release the Israelites from captivity. Following God's command, Aaron smote the water in the river with his rod, in the sight of Pharaoh, and in the sight of his servants.

19 And the Lord spake unto Moses, Say unto Aaron, Take thy rod, and stretch out thine hand upon the waters of Egypt, upon their streams, upon their rivers, and upon their ponds, and upon all their pools of water, that they may become blood; and that there may be blood throughout all the land of Egypt, both in vessels of wood, and in vessels of stone.
20 And Moses and Aaron did so, as the Lord commanded; and he lifted up the rod, and smote the waters that were in the river, in the sight of Pharaoh, and in the sight of his servants; and all the waters that were in the river were turned to blood.
21 And the fish that was in the river died; and the river stank, and the Egyptians could not drink of the water of the river; and there was blood throughout all the land of Egypt.

The plague lasted for seven days. However, as the same feat was duplicated by Pharaoh's magicians, he refused to give in to Moses' demands, and doubled their work.