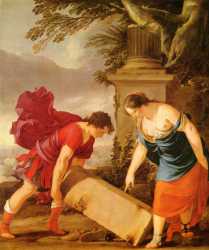 A daughter of king Pittheus of Troezen. Bellerophon sued for her hand, but was banished from Corinth before the nuptials took place.1 She was surprised on one occasion by Poseidon in the island of Sphaeria, whither she had gone, in consequence of a dream, for the purpose of offering a sacrifice on the tomb of Sphaerus. Aethra therefore dedicated in the island a temple to Athena Apaturia (the Deceitful), and called the island Hiera instead of Sphaeria, and also introduced among the maidens of Troezen the custom of dedicating their girdles to Athena Apaturia on the day of their marriage.2

At a later time she became the mother of Theseus by Aegeus.3 In the night in which this took place, Poseidon also was believed to have been with her.4 According to Plutarch5 her father spread this report merely that Theseus might be regarded as the son of Poseidon, who was much revered at Troezen. This opinion, however, is nothing else but an attempt to strip the genuine story of its marvels.

After this event she appears living in Attica, from whence she was carried off to Lacedaemon by Castor and Polydeuces, and became a slave of Helen, with whom she was taken to Troy.6 At the taking of Troy she came to the camp of the Greeks, where she was recognized by her grandsons, and Demophon, one of them, asked Agamemnon to procure her liberation. Agamemnon accordingly sent a messenger to Helen to request her to give up Aethra. This was granted, and Aethra became free again.7

According to Hyginus8 she afterwards put an end to her own life from grief at the death of her sons.

The history of her bondage to Helen was represented on the celebrated chest of Cypselus,9 and in a painting by Polygnotus in the Lesche of Delphi.10

For other occurances of the name "Aethra", click here.