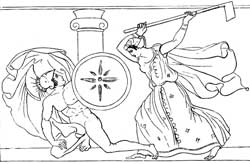 A son of Pleisthenes and grandson of Atreus, king of Mycenae, in whose house Agamemnon and Menelaus were educated after the death of their father.1 Homer and several other writers call him a son of Atreus, grandson of Pelops, and great-grandson of Tantalus.2 His mother was, according to most accounts, Aerope; but some call Eriphyle the wife of Pleisthenes and the mother of Agamemnon. Besides his brother Menelaus, he had a sister, who is called Anaxibia, Cyndragora, or Astyocheia.3 Agamemnon and Menelaus were brought up together with Aegisthus, the son of Thyestes, in the house of Atreus. When they had grown to manhood, Atreus sent Agamemnon and Menelaus to seek Thyestes. They found him at Delphi, and carried him to Atreus, who threw him into a dungeon. Aegisthus was afterwards commanded to kill him but, recognizing his father in him, he abstained from the cruel deed, slew Atreus, and after having expelled Agamemnon and Menelaus, he and his father occupied the kingdom of Mycenae.

The two brothers wandered about for a time, and at last came to Sparta, where Agamemnon married Clytemnestra, the daughter of Tyndareus by whom he became the father of Iphianassa (Iphigeneia), Chrysothemis, Laodice (Electra), and Orestes.4

The manner in which Agamemnon came to the kingdom of Mycenae is differently related. From Homer,5 it appears as if he had peaceably succeeded Thyestes, while, according to others,6 he expelled Thyestes, and usurped his throne. After he had become king of Mycenae, he rendered Sicyon and its king subject to himself,7 and became the most powerful prince in Greece. A catalog of his dominions is given in the Iliad.8 When Homer9 attributes to Agamemnon the sovereignty over all Argos, the name Argos here signifies the Peloponnese, or the greater part of it, for the city of Argos was governed by Diomedes.10 Strabo11 has also shown that the name Argos is sometimes used by the tragic poets as synonymous with Mycenae.

When Helen, the wife of Menelaus, was carried off by Paris, the son of Priam, Agamemnon and Menelaus called upon all the Greek chiefs for assistance against Troy.12 The chiefs met at Argos in the palace of Diomedes, where Agamemnon was chosen their chief commander, either in consequence of his superior power,13 or because he had gained the favor of the assembled chiefs by giving them rich presents.14 After two years of preparation, the Greek army and fleet assembled in the port of Aulis in Boeotia. Agamemnon had previously consulted the oracle about the issue of the enterprise, and the answer given was, that Troy should fall at the time when the most distinguished among the Greeks should quarrel.15 A similar prophecy was derived from a marvelous occurrence which happened while the Greeks were assembled at Aulis. Once when a sacrifice was offered under the boughs of a tree, a dragon crawled forth from under it, and devoured a nest on the tree containing eight young birds and their mother. Calchas interpreted the sign to indicate that the Greeks would have to fight against Troy for nine years, but that in the tenth the city would fall.16 An account of a different miracle portending the same thing is given by Aeschylus.17

Another interesting incident happened while the Greeks were assembled at Aulis. Agamemnon, it is said, killed a stag which was sacred to Artemis, and in addition provoked the anger of the goddess by irreverent words. She in return visited the Greek army with a pestilence, and produced a perfect calm, so that the Greeks were unable to leave the port. When the seers declared that the anger of the goddess could not be soothed unless Iphigeneia, the daughter of Agamemnon, were offered to her as an atoning sacrifice, Diomedes and Odysseus were sent to fetch her to the camp under the pretext that she was to be married to Achilles. She came; but at the moment when she was to be sacrificed, she was carried off by Artemis herself (according to others by Achilles) to Tauris, and another victim was substituted in her place.18 After this the calm ceased, and the army sailed to the coast of Troy. Agamemnon alone had one hundred ships, independent of sixty which he had lent to the Arcadians.19

In the tenth year of the siege of Troy — for it is in this year that the Iliad opens — we find Agamemnon involved in a quarrel with Achilles respecting the possession of Briseis, whom Achilles was obliged to give up to Agamemnon. Achilles withdrew from the field of battle, and the Greeks were visited by successive disasters. Zeus sent a dream to Agamemnon to persuade him to lead the Greeks to battle against the Trojans.20 The king, in order to try the Greeks, commanded them to return home, with which they readily complied, until their courage was revived by Odysseus, who persuaded them to prepare for battle.21 After a single combat between Paris and Menelaus, a battle followed, in which Agamemnon killed several of the Trojans. When Hector challenged the bravest of the Greeks, Agamemnon offered to fight with him, but in his stead Ajax was chosen by lot. Soon after this another battle took place, in which the Greeks were worsted,22 and Agamemnon in despondence advised the Greeks to take to flight and return home.23 But he was opposed by the other heroes. An attempt to conciliate Achilles failed, and Agamemnon assembled the chiefs in the night to deliberate about the measures to be adopted.24

Odysseus and Diomedes were then sent out as spies, and on the day following the contest with the Trojans was renewed. Agamemnon himself was again one of the bravest, and slew many enemies with his own hand. At last, however, he was wounded by Coon and obliged to withdraw to his tent.25 Hector now advanced victoriously, and Agamemnon again advised the Greeks to save themselves by flight.26 But Odysseus and Diomedes again resisted him, and the latter prevailed upon him to return to the battle which was going on near the ships. Poseidon also appeared to Agamemnon in the figure of an aged man, and inspired him with new courage.27 The pressing danger of the Greeks at last induced Patroclus, the friend of Achilles, to take an energetic part in the battle, and his fall roused Achilles to new activity, and led to his reconciliation with Agamemnon. In the games at the funeral pyre of Patroclus, Agamemnon gained the first prize in throwing the spear.28

Agamemnon, although the chief commander of the Greeks, is not the hero of the Iliad, and in chivalrous spirit, bravery, and character, altogether inferior to Achilles. But he nevertheless rises above all the Greeks by his dignity, power, and majesty,29 and his eyes and head are likened to those of Zeus, his girdle to that of Ares, and his breast to that of Poseidon.30 Agamemnon is among the Greek heroes what Zeus is among the gods of Olympus. This idea appears to have guided the Greek artists, for in several representations of Agamemnon still extant there is a remarkable resemblance to the representations of Zeus. The emblem of his power and majesty in Homer is a scepter, the work of Hephaestus, which Zeus had once given to Hermes, and Hermes to Pelops, from whom it descended to Agamemnon.31 His armor is described in the Iliad.32

The remaining part of the story of Agamemnon is related in the Odyssey, and by several later writers. At the taking of Troy he received Cassandra, the daughter of Priam, as his prize,33 by whom, according to a tradition in Pausanias,34 he had two sons, Teledamus and Pelops. On his return home he was twice driven out of his course by storms, but at last landed in Argolis, in the dominion of Aegisthus, who had seduced Clytemnestra during the absence of her husband. He invited Agamemnon on his arrival to a repast, and had him and his companions treacherously murdered during the feast,35 and Clytemnestra on the same occasion murdered Cassandra.36 Odysseus met the shade of Agamemnon in the lower world.37 Menelaus erected a monument in honor of his brother on the river Aegyptus.38 Pausanias39 states, that in his time a monument of Agamemnon was still extant at Mycenae.

The tragic poets have variously modified the story of the murder of Agamemnon. Aeschylus40 makes Clytemnestra alone murder Agamemnon: she threw a net over him while he was in the bath, and slew him with three strokes. Her motive is partly her jealousy of Cassandra, and partly her adulterous life with Aegisthus. According to Tzetzes,41 Aegisthus committed the murder with the assistance of Clytemnestra. Euripides42 mentions a garment which Clytemnestra threw over him instead of a net, and both Sophocles43 and Euripides represent the sacrifice of Iphigeneia as the cause for which she murdered him. After the death of Agamemnon and Cassandra, their two sons were murdered upon their tomb by Aegisthus.44 According to Pindar45 the murder of Agamemnon took place at Amyclae, in Laconica, and Pausanias46 states that the inhabitants of this place disputed with those of Mycenae the possession of the tomb of Cassandra.47

In later times statues of Agamemnon were erected in several parts of Greece, and he was worshiped as a hero at Amyclae and Olympia.48

It should be remarked that several Latin poets mention a bastard son of Agamemnon, of the name of Halesus, to whom the foundation of the town of Falisci or Alesium is ascribed.49

In art, Agamemnon is portrayed as a bearded, regal figure, such as on a Greek relief from Samothrace. On Greek vases he is depicted taking Briseis with him (Attic skyphos, ca. 490 BCE; Paris), and at the destruction of Troy (Attic hydria, ca. 490 BCE; Naples). A Pompeian fresco shows him at the sacrifice of Iphigenia (Casa del Poeta Tragico). He was represented on the pedestal of the celebrated Rhamnusian Nemesis,50 and his fight with Coon on the chest of Cypselus.51 He was painted in the Lesche of Delphi, by Polygnotus.52 Agamemnon's death is frequently depicted on Etruscan urns.

For other occurances of the name "Agamemnon", click here.