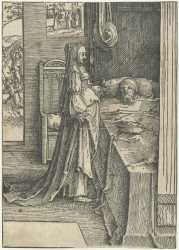 "Father's brother." The son of Omri, whom he succeeded as the seventh king of Israel after Jeroboam. His history is recorded in 1 Kings 16-22. His wife was Jezebel, who was a dominant influence over him. To the calf-worship introduced by Jeroboam he added the worship of Baal. He was severely admonished by Elijah for his wickedness. His anger was on this account kindled against the prophet, and he sought to kill him.

Ahab undertook three campaigns against Ben-hadad II, king of Damascus. In the first two, which were defensive, he gained a complete victory over Ben-hadad, who fell into his hands, and was afterwards released on the condition of his restoring all the cities of Israel he then held, and granting certain other concessions to Ahab.

After three years of peace, for some cause Ahab renewed war1 with Ben-hadad by assaulting the city of Ramoth-Gilead, although the prophet Micaiah warned him that he would not succeed, and that the 400 false prophets who encouraged him were only leading him to his ruin. Micaiah was imprisoned for thus venturing to dissuade Ahab from his purpose. Ahab went into the battle disguised, that he might if possible escape the notice of his enemies; but an arrow from a bow "drawn at a venture" pierced him, and though he stayed up in his chariot for a time he died towards evening,2 and Elijah's prophecy3 was fulfilled. He reigned twenty-three years. Because of his idolatry, lust, and covetousness, Ahab is referred to as pre-eminently the type of a wicked king.4

Ahab is also the name of a false prophet referred to by Jeremiah,5 of whom nothing further is known.