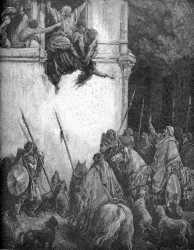 "Chaste." The daughter of Ethbaal (Ithobaal), the king of the Zidonians, and the wife of Ahab, the king of Israel.1 She incited her husband to abandon the worship of Yahweh and to encourage the worship of Baal. Four hundred and fifty prophets ministered under her care to Baal, besides four hundred prophets of the groves [R.V., 'prophets of the Asherah'], which ate at her table.2 Her conduct was in many respects disastrous to the kingdom both of Israel and Judah.3

At length she came to an untimely end. As Jehu rode into the gates of Jezreel, she looked out at the window of the palace, and said, "Had Zimri peace, who slew his master?" Jehu looked up and called to her eunuchs, who threw her from the window, and his horses trod her under their feet. She was immediately consumed by the dogs of the street,4 according to the word of Elijah the Tishbite.5 Jehu ordered his servants to bury her, for she was still a king's daughter, but they found no more of her than the skull, the feet, and the palms of her hands.6

In the New Testament, the name of a prophetess in the church of Thyatira.7

The name Jezebel has become a general name for wicked women.