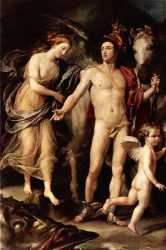 A daughter of the Ethiopian king Cepheus and Cassiopeia. Her mother boasted of her beauty, and said that she surpassed the Nereides. The latter prevailed on Poseidon to visit the country by an inundation, and a sea-monster was sent into the land. The oracle of Ammon promised that the people should be delivered from these calamities, if Andromeda was given up to the monster; and Cepheus, being obliged to yield to the wishes of his people, chained Andromeda to a rock. Here she was found and saved by Perseus, who slew the monster and obtained her as his wife.1

Andromeda had previously been promised to Phineus (Hyginus calls him Agenor), and this gave rise to the famous fight of Phineus and Perseus at the wedding, in which the former and all his associates were slain.2 Andromeda thus became the wife of Perseus, and bore him many children.3

Athena placed her among the stars, in the form of a maiden with her arms stretched out and chained to a rock, to commemorate her delivery by Perseus.4 Conon5 gives a wretched attempt at an historical interpretation of this mythus.

The scene where Andromeda was fastened to the rock is placed by some of the ancients in the neighborhood of Iope in Phoenicia, while others assign to it a place of the same name in Ethiopia.

The tragic poets often made the story of Andromeda the subject of dramas, which are now lost. The moment in which she is relieved from the rock by Perseus is represented in an anaglyph still extant.

The constellation Andromeda contains the Andromeda galaxy M31, one of the most distant celestial objects visible to the naked eye.

The oldest depiction of Andromeda is found on a Corinthian amphora (sixth century BCE). Among the representations of Perseus and Andromeda on murals the most famous is perhaps the large tableau at the Casa dei Dioscuri at Pompeii. Here, Perseus helps Andromeda down from the rock she was chained to, after his victory over the monster (possibly a copy of a work by the Attic painter Nicias, fourth century BCE). Rubens too painted this subject.