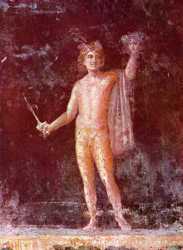 The famous Argive hero, was a son of Zeus and Danaë, and a grandson of Acrisius.1 Acrisius, who had no male issue, consulted the Pythian oracle, and received the answer, that if Danaë should give birth to a son, he would kill his father. Acrisius, accordingly, shut up his daughter in a subterraneous apartment, made of brass or stone.2 But Zeus having metamorphosed himself into a shower of gold, came down upon her through the roof of the apartment, and became by her the father of Perseus. From this circumstance Perseus is sometimes called χρυσόπατρος (chrysopatros) or αυριγενα (aurigena).3

When Acrisius discovered that Danaë had given birth to a son, he threw both mother and son into a chest, and put them out to sea; but Zeus caused the chest to land in the island of Seriphus, one of the Cyclades, where Dictys, a fisherman, found them, and carried them to his brother, king Polydectes. According to a later or Italian tradition, the chest was carried to the coast of Italy, where king Pilumnus married Danaë, and founded Ardea;4 or Danaë is said to have come to Italy with two sons, Argus and Argeus, whom she had by Phineus, and took up her abode on the spot where Rome was afterwards built.5

But, according to the common story, Polydectes, king of Seriphus, made Danaë his slave, and courted her favor, but in vain; and in order to obtain the undisturbed possession of her, he sent off Perseus, who had in the meantime grown up to manhood, to the Gorgons, to fetch the head of Medusa, which he said he would give to Hippodamia as a wedding present.6 Another account again states that Polydectes married Danaë, and caused Perseus to be brought up in the temple of Athena. When Acrisius learned this, he went to Polydectes, who, however, interfered on behalf of the boy, and the latter promised not to kill his grandfather. Acrisius, however, was detained in Seriphus by storms, and during that time Polydectes died. During the funeral games the wind carried a disk thrown by Perseus against the head of Acrisius, and killed him, whereupon Perseus proceeded to Argos and took possessions of the kingdom of his grandfather.7

But to return to the common tradition, Athena, with whom Medusa had ventured to contend for the prize of beauty, first showed to Perseus the head of Gorgo in images, near the town of Diecterion in Samos, and advised him to be unconcerned about the two immortal Gorgons, Stheno and Euryale. Perseus then went first to the Graeae, the sisters of the Gorgons, took from them their one tooth and their one eye, and did not restore them to the Graeae until they showed him the way to the nymphs; or he cast the tooth and the eye into lake Triton, so that the Graeae were no longer able to guard the Gorgons.8 The nymphs provided Perseus with winged sandals, a bag, and the helmet of Hades, which rendered him invisible, Hermes with a sickle, and Athena with a mirror.9

Being thus armed, he went to the Gorgons, who dwelt near Tartessus on the coast of the Ocean, whose heads were covered, like those of serpents, with scales, and who had large tusks like boars, brazen hands, and golden wings. He found them asleep, and cut off the head of Medusa, looking at her figure through the mirror, for a look at the monster herself would have changed him into stone. Perseus put her head into the bag which he carried on his back, and as he went away, he was pursued by the winged Gorgons.10

On his return he visited Ethiopia, where he saved and married Andromeda, by whom he became the father of Perses, whom he left with Cepheus. During this journey Perseus is also said to have come to the Hyperboreans, by whom he was hospitably received,11 and to Atlas, whom, by the head of Gorgo, he changed into the mountain of the same name.12

Phineus, the brother of Cepheus, was likewise changed into stone, and when Perseus returned to Seriphos he found his mother with Dictys in the temple, whither she had fled from the embraces of Polydectes. Perseus found the latter at a repast, and metamorphosed him and all his guests, and, some say, the whole island, into stone,13 and presented the kingdom to Dictys. Perseus then gave the winged sandals and the helmet to Hermes, who restored them to the nymphs and to Hades, and Athena received the head of Gorgo, which was put on the shield or breast-plate of the goddess. Hereupon Perseus went to Argos, accompanied by Cyclopes, skilled in building,14 by Danaë, and Andromeda. Acrisius, remembering the oracle, escaped to Larissa, in the country of the Pelasgians; but Perseus followed him, in order to persuade him to return.15

Some writers state that Perseus, on his return to Argos, found Proetus who had expelled his brother Acrisius, in possession of the kingdom;16 Perseus slew Proetus, and was afterwards killed by Megapenthes, the son of Proetus, who avenged the death of his father.17 Some again relate that Proetus was expelled, and went to Thebes.18 But the common tradition goes on thus: when Teutamias, king of Larissa, celebrated games in honor of his guest Acrisius, Perseus, who took part in them, accidentally hit the foot of Acrisius, and thus killed him. Acrisius was buried outside the city of Larissa, and Perseus, leaving the kingdom of Argos to Megapenthes, the son of Proetus, received from him in exchange the government of Tiryns. According to others, Perseus remained in Argos, and successfully opposed the introduction of the Bacchic orgies.19

Perseus is said to have founded the towns of Mideia and Mycenae.20 By Andromeda he became the father of Alcaeus, Sthenelus, Heleus, Mestor, Electryon, Gorgophone, and Autochthe,21 Perseus was worshiped as a hero in several places, e.g. between Argos and Mycenae, in Seriphus, and at Athens, where he had an altar in common with Dictys and Clymene.22 Herodotus23 relates that a temple and a statue of Perseus existed at Chemnis in Egypt, and that the country was blessed whenever he appeared.

Perseus is often depicted in ancient art as a young hero with as attributes the winged shoes, the helmet of invisibility, and a scimitar. Several Greek vases show Danaë and the young Perseus with the chest that was supposed to ensure their deaths. The slaying of Medusa is depicted on a metope of the temple C at Selinus (early sixth century BCE). The rescue of Andromeda is found on various vases, coins, and gem stones, on frescoes and reliefs in Pompeii (the Casa dei Vettii and the Casa del Sacerdote Amando), and on a relief of the temple of Isis.

Marble reliefs in the Museum of the Capitol at Rome and the Museo Nazionale at Naples also depict Andromeda's rescue. A sculpture of Perseus in classical style, made by Antonio Canova (1757-1822), can be found in the Vatican. Another well-known work is Cellini's Perseus in the Loggia dei Lanzi at Florance.

For other occurances of the name "Perseus", click here.