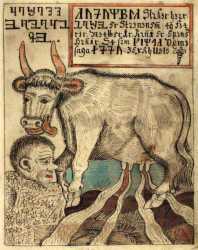 The primeval cow who sprang from the dripping rime in Ginnungagap. She is only mentioned by Snorri Sturluson in Gylfaginning. Four streams of milk ran from her udders, and this provided the proto-giant Ymir with nourishment. Auðumbla herself was nourished by licking the ice-blocks, which were salty. The first day she licked the blocks, there came forth from the blocks in the evening a man's hair; the second day, a man's head; the third day the whole man was there. His name was Búri, the progenitor of the Æsir.

The name Auðhumbla is found among list of cow names in the Nafnaþulur.