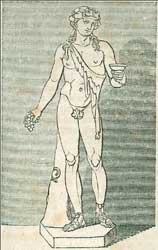 The Latin form of the Greek Βάκχος, a surname or epithet of Dionysus. The name Bacchus originated in the fifth century BCE and refers to the loud cries with which Dionysus was worshiped at the Dionysiac mysteries, the so-called orgia. This form of worship turned into occasions for licentiousness and intoxication and became popular in Rome around 200 BCE. The Dionysiac mysteries in Rome, called the Bacchanalia, became increasingly extreme whereupon the Roman Senate decided to prohibit them in 186 BCE. Even though they were officially suppressed, illicit Bacchanals persisted, particularly in southern Italy.

Through his association with festivals and entertainment, Bacchus also became a god of the theater.

It should be noted that Livy, who is the principle Roman source on the Bacchanalia, offers a rather biased and unlikely account of the Bacchanals.