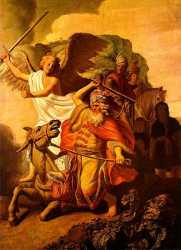 The son of Beor, a man endowed with the gift of prophecy.1 He is mentioned in conjunction with the five kings of Midian, apparently as a person of the same rank.2 He seems to have lived at Pethor,3 on the river Euphrates, in Mesopotamia. Such was his reputation that when the Israelites were encamped in the plains of Moab, Balak, the king of Moab, sent for Balaam to curse them. Balaam at first was prohibited by God from going. He was again sent for by the king and again refused, but was at length allowed to go. He yielded to the temptations of riches and honor which Balak set before him; but God's anger was kindled at this manifestation of determined self-will, and the angel of the Lord stood in the way for an adversary against him4 (see Baudoin).

Balaam predicted a magnificent career for the people whom he was called to curse,5 but he nevertheless suggested to the Moabites the expedient of seducing them with sexual immorality and sacrifices to their gods. The effect of this, a deadly plague, is recorded in Num. 25. A battle was afterwards fought against the Midianites, in which Balaam sided with them, and was slain by the sword of the people whom he had endeavored to curse.6

The event is referred7 to by the apostle Peter. In Micah 6:5 reference also is made to the relations between Balaam and Balak.