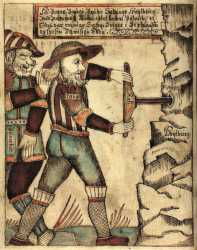 "Ring-shaped." The name of a jötunn. He was the brother of Suttungr, who owned the mead of poetry. Odin desired the mead for himself and set out to obtain it. The story is told by Snorri Sturluson in Skáldskaparmál:

Odin departed from home and came to a certain place where nine thralls were mowing hay. He asked if they desired him to whet their scythes, and they assented. Then he took a hone from his belt and whetted the scythes; it seemed to them that the scythes cut better by far, and they asked that the hone be sold them. But he put such a value on it that whoso desired to buy must give a considerable price: nonetheless all said that they would agree, and prayed him to sell it to them. He cast the hone up into the air; but since all wished to lay their hands on it, they became so intermingled with one another that each struck with his scythe against the other's neck.

Odin sought a night's lodging with the giant who is called Baugi, Suttungr's brother. Baugi bewailed his husbandry, saying that his nine thralls had killed one another, and declared that he had no hope of workmen. Odin called himself Bölverkr in Baugi's presence; he offered to undertake nine men's work for Baugi, and demanded for his wages one drink of Suttungr's Mead. Baugi declared that he had no control whatever over the mead, and said that Suttungr was determined to have it to himself, but promised to go with Bölverkr and try if they might get the mead. During the summer Bölverkr accomplished nine men's work for Baugi, but when winter came he asked Baugi for his hire. Then they both set out for Suttungr's. Baugi told Suttungr his brother of his bargain with Bölverkr; but Suttungr flatly refused them a single drop of the mead. Then Bölverkr made suggestion to Baugi that they try certain wiles, if perchance they might find means to get at the mead; and Baugi agreed readily. Thereupon Bölverkr drew out the auger called Rati, saying that Baugi must bore the rock, if the auger cut. He did so. At last Baugi said that the rock was bored through, but Bölverkr blew into the auger-hole, and the chips flew up at him. Then he discovered that Baugi would have deceived him, and he bade him bore through the rock. Baugi bored anew; and when Bölverkr blew a second time, then the chips were blown in by the blast. Then Bölverkr turned himself into a serpent and crawled into the auger-hole, but Baugi thrust at him from behind with the auger and missed him.

The episode is alluded to by Odin himself in the poem Hávamál, where he seems to assert that it was he who used Rati to drill the hole.

Baugi is only mentioned in connection to the mead of poetry but does not appear in Hávamál, although a giant named Baugi is listed among the jötnar in the Nafnaþulur.