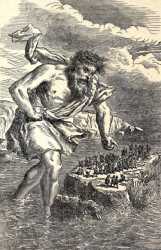 "Sup-heavy." A jötunn, son of Gillingr, and owner of the mead of poetry. After his parents were murdered by the dwarfs Fjalarr and Galarr, he went over and took the dwarfs and carried them out to sea, and set them on a reef which was covered at high tide. They pleaded with him for their lives, and as the price of reconciliation offered him the precious mead in compensation for their murder of his parents. Suttungr agreed and took the mead home where he concealed it in the chamber Hnitbjörg, placing his daughter Gunnlöð there to watch over it.

Odin desired the mead and through subterfuge managed to work his way inside the chamber and drained the three vessels containing the mead. Then he changed himself into an eagle and furiously flew away. Suttungr saw the flight and he too changed himself into an eagle and flew after Odin. When the Æsir saw Odin flying, they placed their vats out in the court; and when Odin came into Ásgarðr, he spat out the mead into the vats. Still, Odin came so near to being caught by Suttungr that he urinated some mead out; this is called the poetaster's part.

Odin gave the mead of Suttingr to the Æsir and to those men who possess the ability to compose. Therefore, poesy is called Odin's Booty and Find, and his Drink and Gift, and the Drink of the Æsir.

Suttungr's name appears in Alvíssmál and Skírnismál as that of a giant, but only in Hávamál is he actually linked to the tale of the mead of poetry.