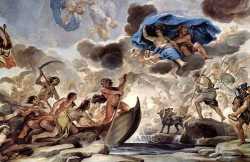 A son of Erebos, the aged and dirty ferryman in the lower world, who conveyed in his boat the shades of the dead — though only of those whose bodies were buried — across the rivers of the lower world.1 For this service he was paid by each shade with an obolus or danace, which coin was placed in the mouth of every dead body previous to its burial. This notion of Charon seems to be of late origin, for it does not occur in any of the early poets of Greece.2

The Etruscan chthonic demon Charun is modeled after him. In modern folklore he appears as Charos or Charontes, represented as a black bird or horseman.

The Dutch morality play Charon, de helsche schippere is a sixteenth-century dramatization of a dialogue by Lucianus on Charon.

In Greek art he was portrayed as grim, bearded man. He is mainly depicted on Greek lekythos, but also on some reliefs and gem stones. Charon appeared in art first, before appearing in literature. He was represented in the Lesche of Delphi by Polygnotus.