death of the firstborn 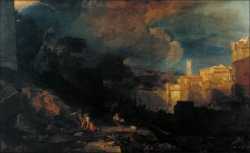 Following God's command, Moses instructed his people to smear lamb's blood on the lintel and door posts of their houses, and not to leave until the morning, "For the Lord will pass through to smite the Egyptians; and when he seeth the blood upon the lintel, and on the two side posts, the Lord will pass over the door, and will not suffer the destroyer to come in unto your houses to smite you."

Finally Pharaoh called for Moses and Aaron and ordered them to gather their people, their flocks and their herds, and leave Egypt. See further Exodus.