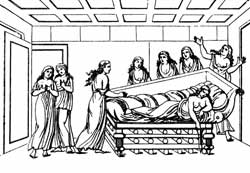 Dido, also called Elissa, which is probably her more genuine name in the eastern traditions, was a Phoenician princess, and the reputed founder of Carthage. The substance of her story is given by Justinus,1 which has been embellished and variously modified by other writers, especially by Virgil, who has used the story very freely, to suit the purposes of his poem. (See especially books i and iv.) We give the story as related by Justinus, and refer to the other writers where they present any differences.

After the death of the Tyrian king, Mutgo (comp. Josephus,2 where he is called Matgenus; Servius,3 who calls him Methres; others again call him Belus or Agenor), the people gave the government to his son, Pygmalion. His daughter Dido or Elissa married her uncle, Acerbas (Virgil4 calls him Sychaeus, and Servius, on this passage, Sicharbas), a priest of Heracles, which was the highest office in the state next to that of king. Acerbas possessed extraordinary treasures, which he kept secret, but a report of them reached Pygmalion, and led him to murder his uncle. (Comp. Virgil5 where Sichaeus is murdered at an altar; whereas J. Malalas,6 and Eustathius,7 represent the murder as having taken place during a journey, or during the chase.)

Hereupon, Dido, who according to Virgil and others was informed of her husband's murder in a dream, pretended that, in order to forget her grief, she would in future live with her brother Pygmalion, while in secret she made all preparations for quitting her country. The servants whom Pygmalion sent to assist her in the change of her residence were gained over by her, and having further induced some noble Tyrians, who were dissatisfied with Pygmalion's rule, to join her, she secretly sailed away in search of a new home.

The party first landed in the island of Cyprus, where their number was increased by a priest of Zeus, who joined them with his wife and children, and by their carrying off by force eighty maidens to provide the emigrants with wives. In the mean time, Pygmalion, who had heard of the flight of Dido, prepared to set out in pursuit of her; but he was prevented by the entreaties of his mother and by the threats of the gods (Servius8 gives a different account of the escape of Dido); and she thus safely landed in a bay on the coast of Africa. Here she purchased (according to Servius9 and Eustathius,10 of king Hiarbas) as much land as might be covered with the hide of a bull; but she ordered the hide to be cut up into the thinnest possible stripes, and with them she surrounded a great extent of country, which she called Byrsa, from βύρσα, i.e. the hide of a bull.11

The number of strangers who flocked to the new colony from the neighboring districts, for the sake of commerce and profit, soon raised the place to a town community. The kinsmen of the new colonists, especially the inhabitants of Utica, supported and encouraged them;12 and Dido, with the consent of the Libyans, and under the promise of paying them an annual tribute, built the town of Carthage. In laying the foundations of the city, the head of a bull was found, and afterwards the head of a horse, which was a still more favorable sign.13

As the new town soon rose to a high degree of power and prosperity, king Hiarbas or Iarbas, who began to be jealous of it, summoned ten of the noblest Carthaginians to his court, and asked for the hand of Dido, threatening them with a war in case of his demand being refused. The deputies, who on their return dreaded to inform their queen of this demand, at first told her that Hiarbas wished to have somebody who might instruct him and his Libyans in the manners of civilized life; and when they expressed a doubt as to whether anybody would be willing to live among barbarians, Dido censured them, and declared that every citizen ought to be ready to sacrifice everything, even life itself, if he could thereby render a service to his country.

This declaration roused the courage of the ten deputies, and they now told her what Hiarbas demanded of her. The queen was thus caught by the law which she herself had laid down. She lamented her fate, and perpetually uttered the name of her late husband, Acerbas; but at length she answered, that she would go wherever the fate of her new city might call her. She took three months to prepare herself, and after the lapse of that time, she erected a funeral pile at the extreme end of the city: she sacrificed many animals under the pretense of endeavoring to soothe the spirit of Acerbas before celebrating her new nuptials. She then took a sword into her hand, and having ascended the pile, she said to the people that she was going to her husband, as they desired, and then she plunged the sword into her breast, and died.14 So long as Carthage existed, Dido was worshiped there as a divinity.15

In the story constructed by Virgil in his Aeneid, he makes Dido, probably after the example of Naevius, a contemporary of Aeneas, with whom she falls in love on his arrival in Africa. As her love was not returned, and Aeneas hastened to seek the new home which the gods had promised him, Dido in despair destroyed herself on a funeral pile. The anachronism which Virgil thus commits is noticed by several ancient writers.16

Only a few wall decoration from antiquity depict Dido. Her death is the subject of a painting by Rubens, an etching by Diamantini, and a sculpture by Cayot.