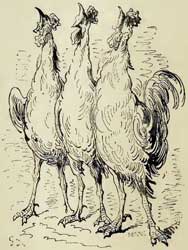 "Golden comb." The golden rooster whose crowing at the time of Ragnarök shall waken the Æsir and the host of heroes in Odin's hall. The same stanza mentions another rooster with a similar function, namely a rust-red bird beneath the earth, at the bars of Hel. The name of this bird, who wakes the people of Hel's domain, is nowhere stated.

Crowed o'er the Æsir
Gullinkambi,
which wakens heroes
with the sire of hosts;
but another crows
beneath the earth,
a soot-red cock,
in the halls of Hel.

See also Fjalarr, the rooster who lives in the wood Gálgviðr.