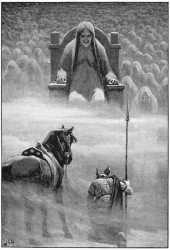 The name of the realm of the dead and of the goddess presiding over it. Hel is situated beneath one of the three roots of Yggdrasil. It is where those who die of sickness or of old age go, while evil men go to Hel and thence down to Niflhel. The gate to Hel is variously called Helgrind ("Hel-gate"), Nágrind ("Corpse-gate") and Valgrind "Corpse-gate"). The river Gjöll, one of the rivers that spring from Hvergelmir, runs near the gate. At Ragnarök, all the champions of Hel will follow Loki to fight against the gods. They shall be wakened by a soot-red rooster.

Hel, the ruler, is named by Snorri Sturluson as one of the three children of Loki and Angrboða. He says in Gylfaginning, chapter 34, that the gods perceived by prophecy that from Loki's offspring great misfortune would befall them, so Odin had these children brought to him:

Hel he cast into Niflheim, and gave to her power over nine worlds, to apportion all abodes among those that were sent to her: that is, men dead of sickness or of old age. She has great possessions there; her walls are exceeding high and her gates great. Her hall is called Sleet-Cold; her dish, Hunger; Famine is her knife; Idler, her thrall; Sloven, her maidservant; Pit of Stumbling, her threshold, by which one enters; Disease, her bed; Gleaming Bale, her bed-hangings. She is half blue-black and half flesh-color (by which she is easily recognized), and very lowering and fierce.

In chapter 49, which details Baldr's death, Hermóðr rides to the underworld to offer Hel a ransom if she will let Baldr return to Ásgarðr. He crosses the Gjallarbrú, guarded by the maiden Móðguðr, who tells him that Baldr too has ridden over the bridge, and that he will find the road to Hel down and to the north. Hermóðr follows the Hel-way until he comes to the Hel-gate. His horse jumps over the gate and they proceed to the hall of Hel, where he finds Baldr sitting in the high-set. He tarries there overnight and in the morning he beseeches Hel that Baldr might ride home with him, telling her how great weeping was among the Æsir. Hel agrees to let Baldr go if all things in the world, alive or dead, will weep for him; if not Baldr would remain in Hel. And all things did, with the exception of a hag named Þökk, and so Baldr was not redeemed out of Hel. Still, both he and his slayer, his brother Höðr, shall come out of Hel after the final battle at Ragnarök to govern a new world. Baldr's wife Nanna, who died of grief after his death, was reunited with him in Hel.

Other visitors to Hel are Odin and the valkyrie Brynhildr. In the eddic poem Baldrs draumar, Odin rides to Hel to raise a völva from the dead and question her about Baldr's baleful dreams. On his journey he sees a blood-stained hound coming from Hel.

In Ynglingatal Hel is called Hveðrungr's daughter (Hveðrungs mær). Baldr and Höðr are both periphrased as Companion of Hel, and Loki as Father of Hel. Her servants are Ganglati and Ganglöt.