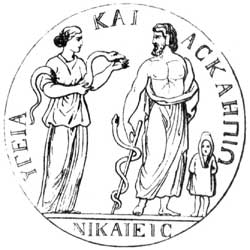 "Health." Hygieia was one of the daughters of Asclepius,1 and granddaughter of Apollo. In one of the Orphic hymns2 she is called the wife of Asclepius; and Proclus3 makes her a daughter of Eros and Peitho. Hygieia played an important role in the cult of Asclepius as a giver of health. She was worshiped and celebrated together with her father on many places (called ἀσκληπιεῖον (asklēpieion), or in Latin aesculapium) of the Greek and Roman world. At Argos the two divinities had a celebrated sanctuary,4 at Athens,5 at Corinth,6 at Gortys,7 at Sicyon,8 and at Oropus.9

The cult was known between the seventh and sixth centuries BCE as a local cult. It spread out after recognition by the oracle of Apollo at Delphi and after the catastrophic plagues in 429 and 427 BCE in Athens and in 293 BCE in Rome. The oldest asklepieion seems to be at Trikke (present-day Trikala in Thessaly), while the biggest centers of worship were established in Epidaurus, Corinth, Cos and Pergamon. Pausanias noted some interesting details about offerings to Hygieia at the Asklepieion of Titane in Sicyon, which was founded, according to him, by Alexanor, the grandson of Asclepius. The statues of Hygieia were covered by masses of women's hair consecrated to the goddess and swathes of Babylonian clothing. The same offerings are also known from the inscriptions discovered in the Cycladic island of Paros.

We learn from Pausanias about a special type of large — but not venomous — snake living in the region of Epidaurus; the snake is her ordinary attribute, which she is often feeding from a cup. Sometimes Hygieia is accompanied by Telesphorus, the dwarf with a cowl on his head, who is a symbol of the recovery. According to some myths he was the brother of Hygieia and a deity in Thrace.

Although she is originally the goddess of physical health, she is sometimes conceived as the giver or protectress of mental health, that is, she appears as mens sana, or ὑλίεα φρενῶν (hyliea phrenōn),10 and was thus identified with Athena, surnamed Hygieia.11

With the increasing importance of Asclepius' cult during the Roman period, Hygieia was associated with the moon, and her father, the most worshiped of the gods, was considered the equal of the sun. At Rome there was a statue of her in the temple of Concordia.12

The name of Hygieia survives in present times in words such as hygiene. Her sacred snake together with the Rod of Asclepius is the symbol for medicine.

Hygieia was sung of and represented by many artists from the fourth century BCE until the end of the Roman era. Ariphron, the Sikyonian, who lived in the fourth century BCE, was the author of a hymn celebrating her. The statues of Hygieia originated from well-known masters like Skopas, Timotheos (both of these works are currently in the National Archaeological Museum of Athens), and Bryaxis. Roman sculptors liked to create her image as well. Good examples of Roman works of Hygieia are located in the museum collections in Epidaurus, Herakleion, Nicosia and Rome. The ivory-cut relief from Walker's gallery in Liverpool represents Hygieia in her typical form as a fine young woman feeding a huge sacred snake which is wrapped around her body. Rubens made a painting of her.