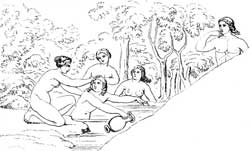 A son of Theiodamas, king of the Dryopes, by the nymph Menodice;1 or, according to others, a son of Heracles, Euphemus, or Ceyx.2 He was the favorite of Heracles, who, after having killed his father, Theodamas, took him with him when he joined the expedition of the Argonauts.3

When the Argonauts landed on the coast of Mysia, Hylas went out to fetch water for Heracles; but when he came to a well, his beauty excited the love of the naiades, who drew him down into the water, and he was never seen again.4 Heracles himself endeavored to trace him, and called out his name, but in vain; and the voice of Hylas was heard from the bottom of the well only like a faint echo, whence some say that he was actually metamorphosed into an echo.

While Heracles was engaged in seeking his favorite, the Argonauts sailed away, leaving Heracles and his companion, Polyphemus, behind. He threatened to ravage the country of the Mysians unless they would find out where Hylas was, either dead or alive.5 Hence, says the poet, the inhabitants of Cios (Prusa) still continue to seek for Hylas: namely, the inhabitants of Prusa celebrated an annual festival to the divine youth Hylas, and on that occasion the people of the neighborhood roamed over the mountains calling out the name of Hylas. It was undoubtedly this riotous ceremony that gave rise to the story about Hylas.

Hylas is portrayed on several coins from Cios and on frescoes in Pompeii (such as the Casa del Efebo) and Herculaneum.