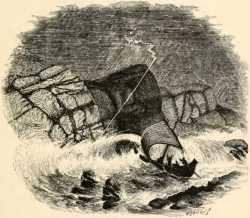 In Manx tradition, a stalwart and marauding baron who resided in an extensive but crudely-built castle near the summit of South Barrule. The celebrated witch Oda caused his castle to be set on fire. Kitter and his men were away on a hunting trip at that time, but when they saw flames coming out of every door and window of the castle, the party hurried to the shore. They jumped into the first boat they could find and started to cross the narrow channel that separates the Calf from the mainland. Oda watched Kitter's party embark and used her witchcraft to cause a storm. The poorly-constructed and over-burdened boat was driven upon a rocky islet lying midway between the two shores, where it at once swamped and capsized. The men clung to the rocks and called for help, but the waters overwhelmed them and they all perished.

The rocky islet has ever since that day, in commemoration of the event, borne the name Kitterland, or Kitter's Island.