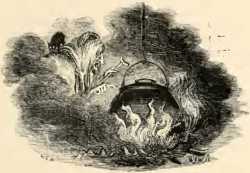 A celebrated witch who resided in a cavern on the coast near Port Erin. She was retained and fed liberally by the suffering country people to help them in wreaking vengeance on their common enemy, a marauding baron named Kitter. One day Kitter and his retainers set forth on an expedition and Oda went to the baron's castle to await her chance. While the baron's cook Eaoch was asleep, she caused a large cauldron of fat to boil over into the fire, and in an instant the whole castle went up in flames. Some of the oil had splashed on the cook 's face, and he awoke and rushed out of the burning castle. He roared so loud that Kitter and his men heard him ten miles away. Kitter saw flames pouring forth from every door and window of his castle, and they hurried to the shore and jumped into the first currach they could find, and started rowing across the narrow channel that separates the Calf from the mainland.

Oda hastened down to the south shore, and standing on the top of a high, precipitous rock now known as Spanish Head, used the powers of her witchcraft and caused a storm to arise. The overcrowded and poorly-constructed boat was driven upon a rocky islet lying midway between the two shores. It capsized and Kitter and his men drowned in the surging stream.