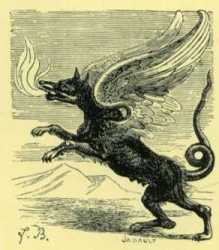 The Kludde of Brabant and Flanders is an evil spirit which resembles the Hedley Kow, though, perhaps, he is of a yet more alarming and dreadful character. In fact, he inspires such fear among the peasants, that they will on no account venture into a forest, field, or road which is haunted by him.

Kludde often transforms himself into a tree, small and delicate at first, but rapidly shooting into the clouds, while everything it shadows is thrown into confusion. Again, he presents himself as a black dog, running on its hind-legs, with a chain round its throat; and will spring at the throat of the first person he meets, fling him to the ground, and vanish.

Occasionally Kludde will assume the form of a cat, frog, or bat, in which disguises he may always be known by two little blue flames fluttering or dancing before him; but most commonly he appears as an old half-starved horse, and so presents himself to stable-boys and grooms, who mount on it by mistake, instead of on their own horse or mare. Kludde sets off at full speed, the frightened lad clinging on as best he may, till they reach water, into which he rushes and laughs wildly, till his victim, sullen and angry, has worked his way to dry land again.

The name of the specter comes from his cry: "Kludde, Kludde!"

This article incorporates text from Notes on the folk-lore of the northern countries of England and the borders (1879) by William Henderson, which is in the public domain.