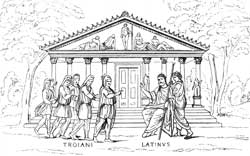 A king of Latium, is described in the common tradition as a son of Faunus and the nymph Marica, as a brother of Lavinius, and the husband of Amata, by whom he became the father of Lavinia, whom he gave in marriage to Aeneas.1 But along with this there are a variety of other traditions.

Hesiod2 calls him a son of Odysseus and Circe, and brother of Agrius, king of the Tyrrhenians, and Hyginus3 calls him a son of Telemachus and Circe, while others describe him as a son of Heracles, by an Hyperborean woman, who was afterwards married to Faunus,4 or as a son of Heracles by a daughter of Faunus.5 Conon6 relates, that Latinus was the father of Laurina, whom he gave in marriage to Locrus, and that Latinus was slain by Heracles for having taken away from him the oxen of Geryon.

According to Festus7 Jupiter Latiaris once lived upon the earth under the name of Latinus, or Latinus after the fight with Mezentius suddenly disappeared, and was changed into Jupiter Latiaris. Hence the relation between Jupiter Latiaris and Latinus is perfectly analogous to that between Quirinus and Romulus, and Latinus may be conceived as an incarnation of the supreme god.