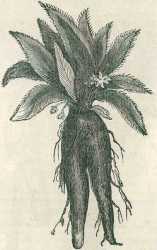 The mandrake or mandragora (Mandragora officinarum) has, in folklore and superstition, always been regarded as a plant with special powers. This idea is based on the shape of the root, which is forked and roughly resembles a human figure. It was believed to cry and groan like a child when pulled out by the roots.

The mandrake root was used for invulnerability, for discovering treasures, and as a charm for pregnancy. When properly prepared it could also be used as an aphrodisiac.

Philippe de Thaon, in his Anglo-Norman Le Bestiaire (c. 1119), says of the mandragora that is has two roots, which have the make of man and woman; the female root resembles woman and girl, the female is leaved like a leaf of lettuce; the male remains leaved as the beast is (i.e. has the leaves peculiar to the plant). It is gathered by a stratagem... The man who is to gather it must fly round about it, must take great care that he does not touch it; then let him take a dog bound, let it be tied to it, which has been close shut up and has fasted three days, and let it be shown bread, and called from afar; the dog will draw it to him, the root will break, it will send forth a cry, the dog will fall down dead at the cry which he will hear; such virtue this herb has, that no one can hear of it, but he must always die. And if the man heard it, he would directly die: therefore he must stop his ears, and take care that he hear not the cry, lest he die, as the dog will do, which shall hear the cry. When one has this root, it is of great value for medicine; for it cures of every infirmity, except only death, where there is no help.

Even when the faith in the mandragora no longer existed, it was still regarded as a strong narcotic. Shakespeare makes Iago say of Othello:

... Not poppy, nor mandragora,
Nor all the drowsy syrups in the world,
Shall ever medicine thee to that sweet sleep
Which thou ow'dst yesterday."

"Would curses kill as doth the bitter Mandrake's groan,
I would invent as bitter, searching terms,
As curst, as harsh, and horrible to hear."