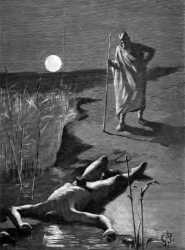 "Wise", "Mindful." A figure in Norse mythology renowned for his wisdom. Snorri Sturluson describes him as one of the Æsir but he is also found among the jötnar in the Nafnaþulur.

In Ynglinga saga, after the Æsir-Vanir war had ended and a truce had been established, he and Hœnir were sent as hostages to the Vanir. The Vanir immediately made Hœnir a chief, and Mímir provided him with good advice on all occasions. When it was discovered that Hœnir was unable to act without Mímir's advice, the Vanir took Mímir and beheaded him, and sent back his head to the Æsir. Odin took the head, smeared it with herbs so that it would not decay, and sang incantations over it. Thus the head was given the power to speak, and it told Odin many secrets and gave council.

The eddic poem Völuspá mentions Mímisbrunnr, "Mímir's well," as a source of wisdom and as the place where Odin hid his eye. It also says that Odin consults "Mím's head" about the impending events of Ragnarök. Snorri adds in Gylfaginning that Mímir is full of ancient lore, since he drinks of the Mímisbrunnr from the Gjallarhorn. Another reference to Mím's head is found in Sigrdrífumál, and in Fjölsvinnsmál there are references to a vast tree called Mímameiðr, "Mími's-tree."

In a verse by Icelandic skald Egill Skallagrímsson, and quoted by Snorri Sturluson in Skáldskaparmál, Odin is called "Mímir's Friend."