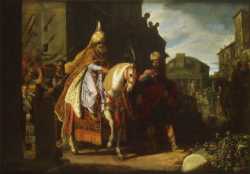 The son of Jair, of the tribe of Benjamin. He resided at Susa, the metropolis of Persia. He adopted his cousin Hadassah (Esther), an orphan child, whom he brought up as his own daughter. When she was brought into the king's harem and made queen in the room of the deposed queen Vashti, he was promoted to some office in the court of Ahasuerus, and was one of those who "sat in the king's gate."1

While holding this office, he discovered a plot of two of the king's chamberlains, Bigthan and Teresh, of those which kept the door, to put the king to death. Mordecai told it to Esther, who told the king in Mordecai's name. The would-be assassins were both hanged, and Mordecai's services to the king in this matter were duly recorded in the royal chronicles.

Haman the son of Hammedatha the Agagite had been raised to the highest position at court. Ahasuerus commanded all the servants that were in the king's gate to bow to Haman and revere him. Mordecai, however, refused to bow down to him, nor did him reference. Haman became full or wrath and sought to massacre the Jews exiles throughout the Persian empire.2 Tidings of this cruel scheme soon reached the ears of Mordecai, who informed Esther, and together they foiled the plan. They distributed arms to the Jews of Susa and other Persian cities so that they were able to defend themselves against Haman's militia. The king eventually rescinded the orders given by Haman and the Jews were delivered from destruction. Mordecai was raised to a high rank, and Haman was executed on the gallows he had by anticipation erected for Mordecai.3

The victory is celebrated annually on the fourteenth en fifteenth of the month Adar and is called Purim (פּוּרִים), from the word pur, "lot." It refers to the fact that Haman had cast lots to determine the day on which his plans were to be executed.