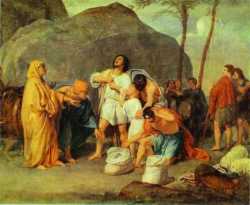 "Son on the right hand." The second and last son of Jacob by Rachel,1 and the last-born of Jacob's thirteen children. His birth took place at Ephrath, on the road between Bethel and Bethlehem, at a short distance from the latter place. His mother died in giving him birth, and with her last breath named him Ben-oni, "Son of my pain," a name which was changed by his father into Benjamin. His posterity are called Benjamites.2

The tribe of Benjamin at the Exodus was the smallest but one.3 During the march its place was along with Manasseh and Ephraim on the west of the tabernacle. At the entrance into Canaan it counted 45,600 warriors. It has been inferred by some from the words of Jacob4 that the figure of a wolf was on the tribal standard. This tribe is mentioned in Rom. 11:1; Phil. 3:5.

The inheritance of this tribe lay immediately to the south of that of Ephraim, and was about 26 miles in length and 12 in breadth. Its eastern boundary was the Jordan. Dan intervened between it and the Philistines. Its chief towns are named in Josh. 18:21- 28. The history of the tribe contains a sad record of a desolating civil war in which they were engaged with the other eleven tribes. By it they were almost exterminated.5

The first king of the Jews was Saul, a Benjamite. A close alliance was formed between this tribe and that of Judah in the time of David,6 which continued after his death.7 After the Exile these two tribes formed the great body of the Jewish nation.8 The tribe of Benjamin was famous for its archers9 and slingers.10