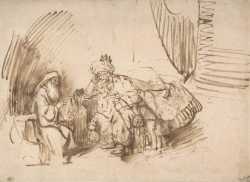 A prophet in the reigns of David and Solomon.1 He is first spoken of in connection with the arrangements David made for the building of the temple,2 and next appears as the reprover of David on account of his sin with Bathsheba.3 He was charged with the education of Solomon,4 at whose inauguration to the throne he took a prominent part.5 His two sons, Zabad6 and Azariah7 occupied places of honor at the king's court. He last appears in assisting David in reorganizing the public worship.8 He seems to have written a life of David, and also a life of Solomon.9

It is also the name of a son of David, by Bathsheba.10