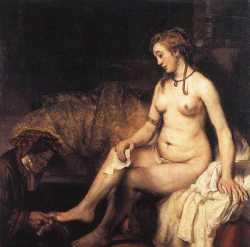 "Daughter of the oath", "Daughter of Sheba." Bathsheba, called also Bathshu'a,1 was the daughter of Eliam2 or Ammiel (3),3 and wife of Uriah the Hittite. David committed adultery with her.4 She bore him a child, but it died on the seventh day.5 After her husband was slain6 she was married to David,7 and became the mother of Solomon.8 She took a prominent part in securing the succession of Solomon to the throne.9