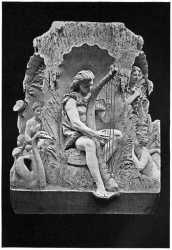 A spirit of rivers and springs of the German Belgians. They sometimes sang the most beautiful melodies in chorus; sometimes, like women, they were seen arranging their hair in the river. The Neckers have also been known to converse with men, and to play all sorts of games.

In Brabant, tradition has it that the Necker sucks the blood of the drowned. It lures its victims to rivulets by emitting the mournful cry of a child.