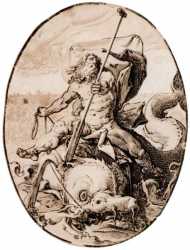 The Roman god of water and the sea, husband Salacia. His name is probably connected with the verb ναίω or nato, and a contraction of navitunus. Neptune's origin is uncertain and when he first appears in Roman history he already has all the characteristics of the Greek god Poseidon. At a religious ceremony in 399 BCE he is mentioned in the company of Apollo, Latona, Diana, Hercules, and Mercury.1 Although his cult became more substantial after his equation with Poseidon, Neptune was never held in the same high regard among the Romans as Poseidon was among the sea-faring Greeks. Yet, when a Roman commander sailed out with a fleet, he first offered up a sacrifice to Neptune, which was thrown into the sea.2

Neptune was also the patron deity of horses and horse races and his title as such is Neptune Equester (from Latin equus, "horse"). There were only two temples of Neptune in Rome: one was near the Circus Flaminius, an ancient race-track, and the other, called Basilica Neptuni, stood in the Campus Martius, not far from the septa. It was dedicated by Agrippa in honor of the naval victory of Actium in 31 BCE.

Neptune's festival was the Neptunalia and it was celebrated on July 23. Little is known about the ceremonies of his festival, except that the people formed tents (umbrae) of the branches of trees, in which they probably rejoiced in feasting and drinking.3 Sacrifices to Neptune consisted of bulls.

There are numerous depictions of Poseidon-Neptune on Roman mosaics: a floor mosaic in the thermae at the Decumanus Maximus in Ostia shows Neptune riding a chariot with four sea-horses, surrounded by Nereides, Tritons, dolphins, etc. On frescoes in Pompeii and Herculaneum the god is depicted many times. Neptune was a favorite subject of Renaissance and baroque painters, and his statue can be found in many gardens, parks, and fountains.