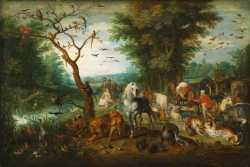 In the Bible, a vessel constructed of gopher-wood, and covered with pitch, 300 cubits long, 50 cubits broad, and 30 cubits high;1 an oblong floating house of three stories, with a door in the side and a window in the roof. It was some 100 years in building.2 The ark was intended to preserve certain persons and animals from the deluge which God was about to bring over the earth. It contained eight persons, Noah and his sons, Shem and Ham and Japheth, and Noah's wife and the three wives of his sons.3 Noah was also commanded to take with him two pairs of every animal, male and female:4

Then, according to the biblical account, for forty days and forty nights, rain fell upon the earth. The waters covered the earth fifteen cubits high, and every living thing on the earth died,5 while the ark floated on the waters. Then, after one hundred and fifty days, the waters subsided, and the ark came to rest upon the mountains of Ararat:6

5 And the waters decreased continually until the tenth month: in the tenth month, on the first day of the month, were the tops of the mountains seen.
6 And it came to pass at the end of forty days, that Noah opened the window of the ark which he had made:
7 And he sent forth a raven, which went forth to and fro, until the waters were dried up from off the earth.
8 Also he sent forth a dove from him, to see if the waters were abated from off the face of the ground;
9 But the dove found no rest for the sole of her foot, and she returned unto him into the ark, for the waters were on the face of the whole earth: then he put forth his hand, and took her, and pulled her in unto him into the ark.
10 And he stayed yet other seven days; and again he sent forth the dove out of the ark;
11 And the dove came in to him in the evening; and, lo, in her mouth was an olive leaf pluckt off: so Noah knew that the waters were abated from off the earth.
12 And he stayed yet other seven days; and sent forth the dove; which returned not again unto him any more.
13 And it came to pass in the six hundredth and first year, in the first month, the first day of the month, the waters were dried up from off the earth: and Noah removed the covering of the ark, and looked, and, behold, the face of the ground was dry.
14 And in the second month, on the seven and twentieth day of the month, was the earth dried.
15 And God spake unto Noah, saying,
16 Go forth of the ark, thou, and thy wife, and thy sons, and thy sons' wives with thee.
17 Bring forth with thee every living thing that is with thee, of all flesh, both of fowl, and of cattle, and of every creeping thing that creepeth upon the earth; that they may breed abundantly in the earth, and be fruitful, and multiply upon the earth.
18 And Noah went forth, and his sons, and his wife, and his sons' wives with him:
19 Every beast, every creeping thing, and every fowl, and whatsoever creepeth upon the earth, after their kinds, went forth out of the ark.