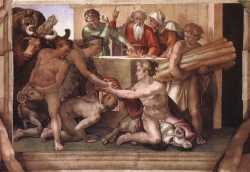 "Rest." The grandson of Methuselah,1 who was for two hundred and fifty years contemporary with Adam, and the son of Lamech, who was about fifty years old at the time of Adam's death, according to the biblical account.

Noah lived five hundred years, and then there were born unto him three sons, Shem, Ham, and Japheth.2 He was a "just man and perfect in his generation," and "walked with God."3 But now the descendants of Cain and of Seth began to intermarry, and then there sprang up a race distinguished for their ungodliness. Men became more and more corrupt, and God determined to sweep the earth of its wicked population.4 But with Noah God entered into a covenant, with a promise of deliverance from the threatened deluge.5 He was accordingly commanded to build an ark6 for the saving of himself and his house. An interval of about one hundred years elapsed while the ark was being built,7 during which Noah bore constant testimony against the unbelief and wickedness of that generation.8

When the ark of "gopher-wood" (mentioned only here) was at length completed according to the command of God, the living creatures that were to be preserved entered into it; and then Noah and his wife and sons and daughters-in-law entered it, and the "Lord shut him in."9 The judgment-threatened now fell on the world, "the world that then was, being overflowed with water, perished."10 The ark floated on the waters for one hundred and fifty days, and then rested on the mountains of Ararat;11 but not for a considerable time after this was divine permission given him to leave the ark, so that he and his family were a whole year shut up within it.12

On leaving the ark Noah's first act was to erect an altar, the first of which there is any mention, and offer the sacrifices of adoring thanks and praise to God, who entered into a covenant with him, the first covenant between God and man, granting him possession of the earth by a new and special charter, which remains in force to the present time.13 As a sign and witness of this covenant, the rainbow was adopted and set apart by God, as a pledge that never again would the earth be destroyed by a flood.

Noah began to be a husbandman and planted a vineyard. "And he drank of the wine, and was drunken; and he was uncovered within his tent."14 Ham saw the nakedness of his father and told his brothers Shem and Japheth, who took a garment and covered Noah while keeping their faces averted. When Noah awoke, he knew what his younger son had done unto him, and cursed his grandson Canaan and his descendants.