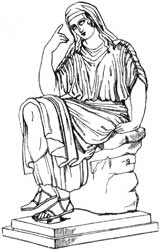 Or Penelopeia (Πηνελόπεια), a daughter of Icarius and Periboea of Sparta.1 According to Didymus, Penelope was originally called Ameirace, Arnacia, or Arnaea, and Nauplius or her own parents are said to have cast her into the sea,2 where she was fed by sea-birds (πννέλοπες) from which she derived her name.3 She was married to Odysseus, king of Ithaca, by whom she had an only child, Telemachus, who was yet an infant at the time when her husband went with the Greeks to Troy.4

During the long absence of Odysseus, she was beleaguered by numerous and importunate suitors, whom she deceived by declaring that she must finish a large shroud which she was making for Laërtes, her aged father-in-law, before she should make up her mind. During the day time she accordingly worked at the shroud, and in the night she undid the work of the day.5 By this means she succeeded in putting off the suitors. But at length her stratagem was betrayed by her servants; and when, in consequence, the faithful Penelope, who was pining and longing for her husband's return, was pressed more and more by the impatient suitors, Odysseus at length arrived in Ithaca, and as she recognized him by several signs, she heartily welcomed him, and the days of her grief and sorrow were at an end.6

While the Homeric tradition describes Penelope as a most chaste and faithful wife, later writers charge her with the very opposite vices, and relate that by Hermes or by all the suitors together she became the mother of Pan.7 Odysseus on his return for this reason repudiated her, whereupon she went to Sparta, and thence to Mantineia, where her tomb was shown in after times.8 According to another tradition, Penelope, with Telemachus and Telegonus, who had killed his father Odysseus, went to Aeaea, and there married Telegonus; whereas, according to others again, she married Telegonus in the Islands of the Blessed.9

The phrase the web of Penelope means a work "never ending, still beginning; never done, but ever in hand," referring to the shroud she is weaving and unraveling.

A statue in the Vatican Museum portrays a seated, veiled woman in a mourning pose. She is named by some as Penelope, but according to others the figure is a decoration also found on grave reliefs. An Attic red-figure vase (ca. 435 BCE) at Chiuse shows on one side Penelope seated at her loom. A fresco at Pompeii depicts the reunion of Odysseus and Penelope.