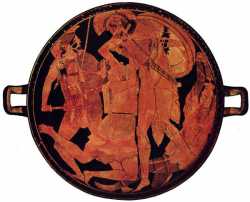 A daughter of Ares and Otrera, and queen of the Amazons.1 In the Trojan war she assisted the Trojans, and offered gallant resistance to the Greeks.2 After the fall of Hector she fought a battle against the Greeks, but was defeated: she herself fell by the hand of Achilles, who mourned over the dying queen on account of her beauty, youth, and valor.3

When Achilles slew Penthesilea he is said to have also killed Thersites because he treated her body with contempt, and reproached Achilles for his love towards her.4Diomedes, a relative of Thersites, is said then to have thrown the body of Penthesilea into the river Scamander, whereas, according to others, Achilles himself buried it on the banks of the Xanthus.5 Some, further, state that she was not killed by Achilles, but by his son Pyrrhus,6 or that she first slew Achilles, and Zeus on the request of Thetis having recalled Achilles to life, she was then killed by him.7

Penthesilea was frequently represented by ancient artists, and among others by Polygnotus, in the Lesche at Delphi.4 A Greek bowl at Munich (ca. 460 BCE) depicts the moment that Achilles drives a spear through the queen's body. The same scene is found on reliefs and sarcophagi. Penthesileia foreshadows Camilla in Virgil's Aeneid, and Clorine in Gerusalemme liberata by Torquato Tasso.