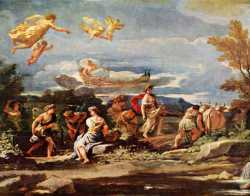 The Roman divinity of the fruit of trees, hence called Pomorum Patrona. Her name is evidently connected with pomum. She is represented by the poets as having been beloved by several of the rustic divinities, such as Silvanus, Picus, Vertumnus, and others.

Her worship must originally have been of considerable importance, as we learn from Varro1 that a special flamen, under the name of flamen Pomonalis, was appointed to attend to her service.2 It is not impossible that Pomona may in reality be nothing but the personification of one of the attributes of Ops.3

Pomona was represented with a carved pruning knife, mainly by painters from the Renaissance and Mannerism periods.